Update: Valve have responded to the European Commission’s claims, saying they disagree with the Commission’s findings and the fine they’ve been issued. Read their full statement below.

Valve and a handful of game publishers have landed themselves in hot water with the European Commision for geo-blocking Steam keys in certain regions in Europe. The Steam owners, along with Bandai Namco, Capcom, Focus Home, Koch Media and ZeniMax (Bethesda’s parent company), have been collectively fined €7.8 million (around £6.9 million) for “breaching EU antitrust rules”.

“Valve and the publishers restricted cross-border sales of certain PC video games on the basis of the geographical location of users within the European Economic Area (‘EEA’), entering into the so called ‘geo-blocking’ practices,” the European Commission said.

An investigation into Valve and the five publishers found that between 2010 and 2015 they had agreements to geo-block certain Steam keys, preventing them from being activated outside of Czechia, Poland, Hungary, Romania, Slovakia, Estonia, Latvia and Lithuania.

Geo-blocking is usually done so games can be sold cheaper in low-income countries. However, people in higher-income countries have often found ways in the past to bypass regional pricing. Obviously, publishers aren’t a fan of this, because it means those people nab the lower prices.

Valve didn’t cooperate with the investigations, and have been fined €1,624,000 (around £1.4 million). The publishers did cooperate however, and had their fines slightly reduced. Even still, SnowRunner and Greedfall publisher Focus Home managed to rack up a fine of €2,888,000 (about £2.6 million). 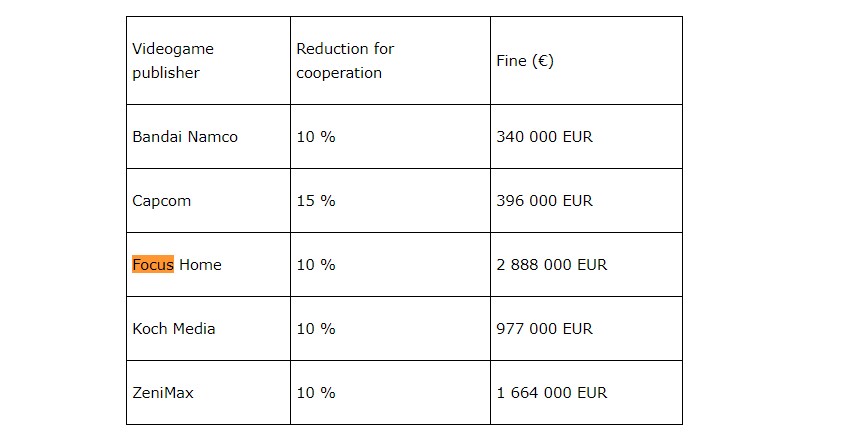 A breakdown of the fines.

Update: Last night, Valve issued a statement to Eurogamer claiming that they did cooperate with the investigation, and disagree with the fine they’ve been given:

“During the seven year investigation, Valve cooperated extensively with the European Commission (“EC”), providing evidence and information as requested. However, Valve declined to admit that it broke the law, as the EC demanded. Valve disagrees with the EC findings and the fine levied against Valve.

“The EC’s charges do not relate to the sale of PC games on Steam – Valve’s PC gaming service. Instead the EC alleges that Valve enabled geo-blocking by providing Steam activation keys and – upon the publishers’ request – locking those keys to particular territories (“region locks”) within the EEA. Such keys allow a customer to activate and play a game on Steam when the user has purchased it from a third-party reseller. Valve provides Steam activation keys free of charge and does not receive any share of the purchase price when a game is sold by third-party resellers (such as a retailer or other online store).

“The region locks only applied to a small number of game titles. Approximately just 3% of all games using Steam (and none of Valve’s own games) at the time were subject to the contested region locks in the EEA. Valve believes that the EC’s extension of liability to a platform provider in these circumstances is not supported by applicable law. Nonetheless, because of the EC’s concerns, Valve actually turned off region locks within the EEA starting in 2015, unless those region locks were necessary for local legal requirements (such as German content laws) or geographic limits on where the Steam partner is licensed to distribute a game. The elimination of region locks may also cause publishers to raise prices in less affluent regions to avoid price arbitrage. There are no costs involved in sending activation keys from one country to another, and the activation key is all a user needs to activate and play a PC game.”

“Such practices deprive European consumers of the benefits of the EU Digital Single Market and of the opportunity to shop around for the most suitable offer in the EU.”

This is naughty because the European Union’s Digital Single Market is designed so that everyone who lives in the EU should be able to buy and use things from all other EU countries.

This may not be the end of it either, as the Commission say “any person or company affected by anti-competitive behaviour as described in this case may bring the matter before the courts of the Member States and seek damages.”